CLOSED FOR THE HOLIDAYS

Kindly note, our firm will be closed on the following days:

If you require immediate assistance, our attorneys can be reached via the listed mobile number on their respective profile on the “Attorneys” field of this website. Our offices will reopen on December 30th, 2019.

We wish you a Merry Christmas and Happy New Year.

Kindly note, our firm will be closed on Monday 28th October, 2019 as the day was declared a public holiday in recognition of Divali. Our offices will reopen on Tuesday 29th October, 2019.

Kindly note, our firm will be closed on Thursday 1st August, 2019 in recognition of the Emancipation Day public holiday. Our offices will reopen on Friday 2nd August, 2019.

Kindly note, our firm will be closed on Wednesday 5th June, 2019 in recognition of the Eid-ul-Fitr public holiday. Our offices will reopen on Thursday 6th June, 2019.

Kindly note, our firm will be closed on Thursday 30th May, 2019 in recognition of the Indian Arrival public holiday. Our offices will reopen on Friday 31st May, 2019. 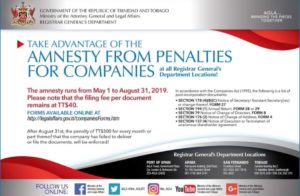 A message purporting to be a statement from our Firm on the ability – or rather the inability – of male police officers to arrest female citizens at night is being circulated via email and WhatsApp. This message asserts that “it is a procedural issue that a woman can be arrested between 6 p.m. and 6 a.m. only if she is arrested by a woman officer and taken to an all-women police station. If she is arrested by a male officer, it has to be proven that a woman officer was on duty at the time of arrest.”

Aside from the concern that our Firm has been falsely associated with advice that we have not given, it is doubly troubling that the advice itself is wrong.

Under the Police Service Act of Trinidad and Tobago there are no limitations on a police officer’s exercise of his or her power of arrest along the lines asserted in the fake message, whether based on the gender of the arresting officer or that of the alleged offender, nor is there any such limitation with respect to the time of day when the officer may make an arrest.

The message is fake news.  Its association with our Firm is deeply regretted.

If you are a client-focused, creative, solutions-oriented thinker, with excellent technical and interpersonal skills, as well as a proven team approach, we would like to hear from you. We offer exciting career prospects in a collegial work environment.

Kindly note, only suitable applicants will be considered.